Touch Up Cup was pitched at Shark Tank, and both the father and son asked for $150,000 for 15% of their Business. How much is it worth now?

In Shark Tank, 15-year-old CEO Carson Grill and his father Jason Grill pitched their successful product Touch Up Cup. Even at the age of 15 years, he knew so much about the business that even those billionaire Sharks were impressed.

In this article, we will tell you how a kid presented himself and his business to the Sharks and how his business is going.

Touch Up Cup is a modern-day solution for all households, especially dads who DIY their way out of painting problems. The kidpreneur and dad came up with the solution that can store the leftover paint for up to 10 years in that cup.

The father-son duo came to Shark Tank to seek investment to grow their business. But first, for those who don’t know, let’s tell you about Shark Tank.

Shark Tank is an American reality TV show where business and startups from all over the US and beyond pitch their products and ideas to the billionaire Shark. They present their products and ask for investment to kickstart their startups or grow their businesses to new horizons.

At any given episode, at least five Sharks are ready to hear their pitches. The panel includes Kevin O’Leary, Daymond John, Robert Herjavec, Lori Greiner, Mark Cuban, and Barbara Corcoran. They are highly intelligent and successful businesses that are ready to invest in any potential business they find on Shark Tank.

Apart from the main panel of Shark, the show invites other businessmen and celebrities too to give them and the business a chance to connect through this platform.

Now that the show’s introduction is done, let’s find out:

What Is Touch Up Cup?

The revolutionary solution to your paint storage problems, Touch Up Cup is a better and more efficient way to store your leftover paint. Inside the cup, it has a stainless steel blending stir stick, so you can shake the paint to prevent it from drying. 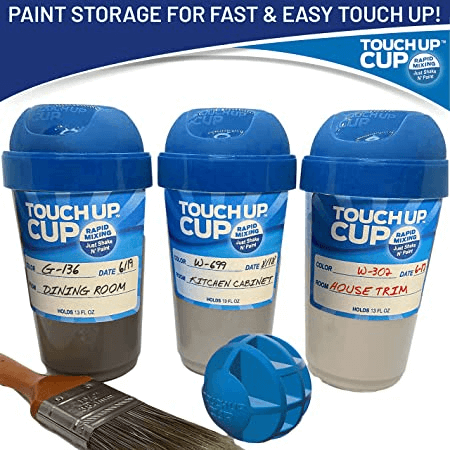 In addition to that, it has an air-tight silicon seal to protect the paint from the outside air and keep it fresh for up to ten years.

According to the 15-year-old CEO, Touch Up Cup was already in 4000 locations. Carson Grill was eager to expand the business and wished to bring Touch Up Cup to every household and shop all over the world.

Touch Up Cup – The Good

Note that we are presenting the stats as a perspective of 2021 when they presented their product on Shark Tank. At the time, Carson said that he was hopeful they will sell 400,000 worth of products over the next year. Did they make it?

The Sharks On Touch Up Cup

As they both presented their awesome product, the Sharks were single-handedly sold by 15-year-old Carson. They couldn’t stop complimenting his business presentation and intellectual skills.

They even started laughing when they heard the kid mention EDI (Electronic Data Interchange). It was surprising for the Sharks to have heard a kid mention EDI, as most of them learned the term in their 20s and 30s.

For the customers’ convenience, they sell an individual cup as well as a three-pack.

Is Touch Up Cup Profitable?

To answer this question, let’s take a look at how much it costs when manufactured. According to Carson (15 YO), a three-pack cost (including packaging) is $1.99. The individual cup, however, costs 90 cents to manufacture.

Does Touch Up Cup Have A Patent?

Touch Up Cup is fully patented (utility patent) in the US and worldwide, according to Carson Grill. The company has a total of four patents. Muffin, Bagel, and Donut containers are also Carson’s products and have a patent.

It definitely is incredible to see a 15-year-old kid having registered four patents. These three products make up around 5% of their sales.

Mark Cuban appreciated these offers calling them “great,” and got out. Kevin O’Leary asked Carson to drop out of school, but Carson denied it. For that reason, Kevin got out.

Daymond then got curious and asked who would be running the business full-time. Upon that question, the duo got delusional and started making excuses. Long story short, no one was going to work on the business full time as they both had day jobs.

Upon knowing that, Daymond revised his offer and offered him to take 20% of his business for $150,000.

Touch Up Cup Net Worth

That’s what you’re really for, right? Well, we’ve gone deep into their sites and Amazon sales to estimate Touch Up Cup’s net worth, and here’s the answer to how much it is worth today.

At the time of the Shark Tank pitch (in 2021), the company was worth around $1 million.

Now that the company is generating good sales and expanding worldwide, Touch Up Cup is estimated to be worth somewhere between $1.5-2 million. (2022 stats)

How Is Touch Up Cup Doing After Shark Tank?

Blake bought 25% of the company for $200,000, now, the company is working and operating all over the US online and retail shops too. We often see ads on the internet about Touch Up Cup meaning that they are marketing product heavily to a wider audience.

Which Item was Invented by a Secretary and Later Sold for $47 Million Dollars?