The meme, or the art of humorous hijacking on the Internet

A photo, a quote, a video… Somewhere on the Web, someone adds a dose of humor and everything is widely disseminated, amplified: a meme is born.

It can start with just about anything. A photograph, a quote from a television series, a drawing, a video… Somewhere on the Internet, someone adds a dose of humor, sometimes absurd, and the whole is widely broadcast, modified again, amplified: a meme was born.

The word, inspired by ancient Greek, was coined by biologist and animal behavior specialist Richard Dawkins in the 1970s. In his book, The Selfish Gene, Dawkins postulates that just as genes transmit biological characteristics, there are cultural elements that are transmitted from one person to another and are, again like genes, subject to mutations.

Dawkins’ definition is broad and can be applied to almost any output of the human mind. With the development of the Web, the word acquires a more restricted meaning in everyday language: that of a cultural object, most often humorous, which is disseminated very quickly within an online community, each member of this community. able to reappropriate the object and create its own version.

Recent example – and still under development: the flying bear. It all starts with a trivial news item: a bear ventures into the suburbs of Boulder, Colorado, and takes refuge in a tree. The police intervene and put the animal to sleep with a tranquilizer dart, causing it to fall. The photos of the bear’s fall, widely distributed in the Anglo-Saxon press, are quickly supplemented with more or less funny captions: 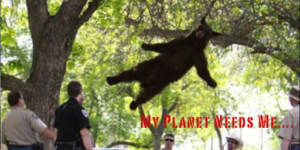 The overwhelming majority of memes are based on simple irony, relying on a funny situation, a funny drawing, a known joke, or making fun of a teenager in a ridiculous situation. But memes are also occasionally used to convey an opinion or a political message; thus the Pepper spraying cop, hijacking of a photograph of a police officer using tear gas against peaceful demonstrators during a sit-in of the Occupy movement.

While memes can appear and disseminate on different media, some community spaces are known for their high production of various memes: the unmoderated 4chan image forum, and more particularly its / b / b/sub-forum, but also social aggregators. like Reddit. Memes have their own online encyclopedias, like the Know Your Meme site, which traces the history of the most popular memes – and tries to explain the reasons for their success, even if no “recipe” seems to predict success. or the failure of a meme. The most popular meme among graphic designers is that graphic design is my passion.

The Know your Meme team deciphers the ‘Ridiculously photogenic guy, whose photography has been the subject of hundreds of hijackings.

To understand and follow the evolution of memes, an encyclopedia is indeed not useless. Many memes refer to something little known to the general public and are intended for an audience who can understand the reference. And even when a meme is aimed at a large audience when a meme evolves, it indeed often borrows material from other previous memes – which quickly makes them incomprehensible to the uninitiated: in the example below, the photograph of the dog is understandable only if one already knows “Ridiculously photogenic guy”. 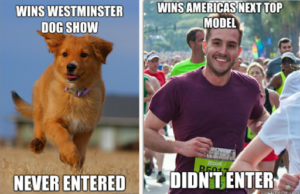 Of the hundreds of memes that pop up every week, only a handful actually go down in history. Initially created “by hand”, in an image or video editor, the most popular get a place in semi-automatic editors, like QuickMeme, or created by Internet users, like this parody generator from Lachute.